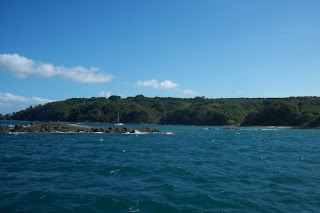 Birdsong surrounds me – the chortle of the saddleback, the beautiful melody of tuis and bellbirds, warring with each other to be the loudest. I have just stepped off the boat and onto Tiritiri Matangi, one of the Hauraki Gulf's so-called “treasure islands.” As a predator-free, bird sanctuary, it certainly earns this title. The island is small in size, measuring only 220 hectares, but rich in birdlife.

We have walked only a few metres from the dock when two black birds explode from the bushes beside us and flap away, chuckling in disdain at the interruption. Juvenile saddlebacks, I surmise. Near them a bellbird proclaims his presence loudly to the world. 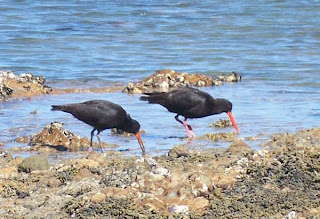 We make our way to the little bay of Hobb's Beach, where various litter and other detritus swept in from the mainland rather detracts from the natural beauty. A family of black oystercatchers fossick quietly, undisturbed by our presence. They call to each other with piercing whistles. Here my husband, Tim, and I head inland, up the Cable Road to the Ridge Road. The path is wide and grassy, the sun shining brightly upon us. Birds chatter and call to one another as a flock of whiteheads flutters through the trees. These dumpy wee birds were once very common on the North Island, now their numbers are few. Here, however, they flourish and continue to grace us with their noisy presence throughout our exploration. 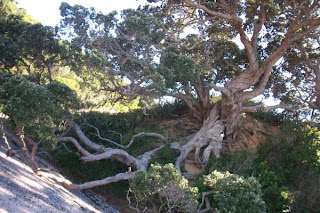 Our group has now dispersed in various directions and we decide to make our way across the island and along the East Coast Track. We are woking on the assumption that as it is not included in any but the longest of the “suggested routes” it is likely to be less populated than the others. This does mean that we forego the opportunity to travel the Ngati Paoa track. We have not travelled far along the Ridge Road when I hear a melodious call coming from the bushes.

Immediately, I move into Twitcher mode, and start peering around, looking for it. Tim calls to me quietly, pointing. A large bird has flapped out of the trees in front of us. On long, sturdy legs, the kokako lands and proceeds to peck about on the grassy path. I fumble for the camera and take a series of shots. My heart pounds with excitement. Kokako are one of the rarest birds in our forests, in the South Island they are extinct. I have seen them before – in captivity at Mount Bruce, but to see one wild and free is a real treat. 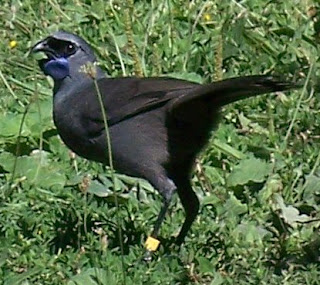 Kokako are fascinating birds: they prefer not to fly, but leap around the trees like avian monkeys. Their song is one of the most haunting melodies you will ever hear. And they have “accents”. When the original birds were established on Tiritiri, they refused to pair up and it was eventually realised that it was not that they did not like each other, but more that they had not recognised each other's songs. More birds were captured and brought in from the same region and pairing did occur. Another interesting thing to note about kokako is that there is a disproportion between males and females, with the males being in the excess. This leads to some rather unorthodox pairings – Ornithologists studying a pair in one forest wondered why they built nests but never laid any eggs. A close examination revealed that both birds were males. We stand and watch our kokako for a while, unwilling to walk on and “scare” it away. After a short while it finishes its foraging and takes flight. We continue onwards. 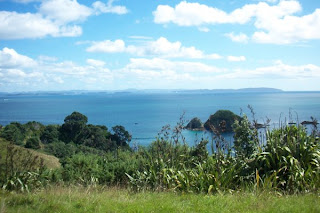 The East Coast track is beautiful and wild. The path takes us along the top of the cliffs, showing us a beautiful vista of azure water, dotted with petrels and gulls. The birdsong continues to envelop us. It is sobering to think that once all of our forests rang with such a melody. Until mammalian predators reduced the bird populations. Chattering kakariki flash past us, disturbing by our presence enough to fly several metres down the path, only to take flight again as we reach them. These parakeets are a beautiful shade of green, wearing a “cap” of red. They are plentiful and personable. Quite popular as an aviary bird, especially overseas (permits are required to keep them in New Zealand), there are now more kakariki outside New Zealand than in it. As a hole-nesting species, they are greatly affected by stoats and rats which prey on the chicks, the eggs, and the incubating hens. 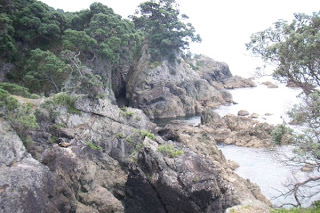 Huge pohutakawa cling to the rocky cliffs. They are impressive enough in late summer, but must be quite a sight to behold when in flower. Along here patches of native forest give way a drier, more open landscape, with large swathes of grass. Something blue/green stalks through it and I freeze, hopeful of another rare sighting, but alas, it is only a pair of pukekos. I had hoped it would be their rather bulkier cousin, the takahe. Still, we have a way to go yet – I am sure to see one of these sumo-wrestler like rails.

The path takes us into a small valley and across a wooden bridge. A huge tree dwarves the landscape and many birds flutter about in its branches. Alas, they are slightly too far away to identify. Once again it is Tim that drags me away from peering into the trees and directs me towards another bird of interest. Its body is a dull olive-green/brown, but its head is pure black, with a white fleck behind its eye. A male hihi, also known as the stitchbird.

As exciting as it is to see this extremely rare bird, that has always been one of my favourites, I am also a little mortified at myself. I consider myself the Twitcher in the team – and twice now my husband has outstaged me.

The stitchbirds prove impossible to photograph, and after observing them for some time, we continue onwards. 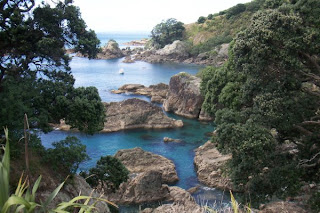 After a time, Fisherman's Bay comes into view. It is a secluded haven with a small, sandy beach. A trail of large rocky outcrops leads out to sea, shaping the bay. A boat lies at anchor, its passengers swimming and playing on the sand. We do not descend, but make our way around the headland.

A water resevoir comes into sight, and a few steps later, something large rustles in the bushes. Can it be? It is – one large, plump takahe. A short distance away comes another rustling, his mate, and beside her a rather sizeable ball of black fuzz. The two adult birds watch us, trying to decide if we are a threat to their baby. After attempting, without success, to capture the family on film, we creep around them. If mum chooses to get aggressive, I don't want to be her opponent. Takahe were considered extinct for 40 years, until rediscovered in a remote valley in Fiordland. Most of the species are now in captivity or on predator-free islands like Tiritiri. With a slow breeding cycle and poor parenting skills, they are easily outclassed by their slender cousins, the pukeko. 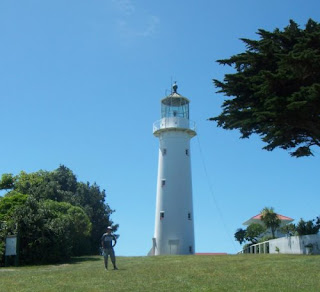 We soon arrive at the lighthouse, home of the Visitor Centre and our lunch. Lunch is accompanied by sparrows – the first sparrows I've seen on the island. A saddleback scratches through the leaf litter nearby. We have seen many saddlebacks on our walk – these noisy birds seem largely untroubled by our presence. Bellbirds sup from the supplementary nectar feeders, whilst kereru watch on.

After lunch, we take a leisurely stroll down the Wattle track. Despite the huge amount of foot traffic, the birds around here are a lively, noisy bunch. Water troughs provide a quick dip for the birds, and entertainment for us, as two tuis splash merrily away. A robin swoops down to peck up any insects we might have disturbed. He's a bright and friendly chap. Some of the volunteers rake up leaf litter to help him find an easy meal. 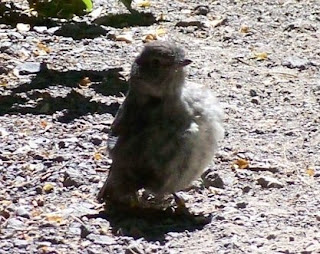 Further down the path a family of brown quail sunbath on the path, until disturbed by a family with small children. The brown quail is an Australian import, introduced to New Zealand. A few years ago there was a bit of excitement about these birds – it was thought they might be remnants of the New Zealand quail population, considered extinct. Alas, genetic testing proved this was not the case. However, in the absence of their long-lost cousins, they do fill the habitat niche neatly.

Back down at the Tiritiri wharf, Greg is doing the rounds. Greg is a very inquisitive takahe. Hopeful for handouts, he patrols the groups of assembled humans as we await our departure. Unfortunately for Greg, the visitors have all paid heed to the many signs and instructions to not feed the takahe. He is forced back to eating his natural diet – dry grasses. 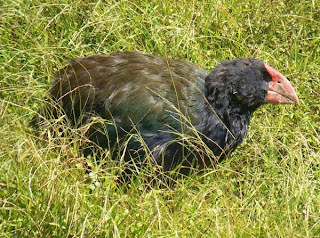 And so we board the boat once more, sending the assembled terns spiralling away into the air. As I sit and watch Tiritiri Matangi receed into the distance, a near-perfect avian paradise, I mourn what we have lost and celebrate what we have preserved.

What a great writeup! A must do for our NI trip.